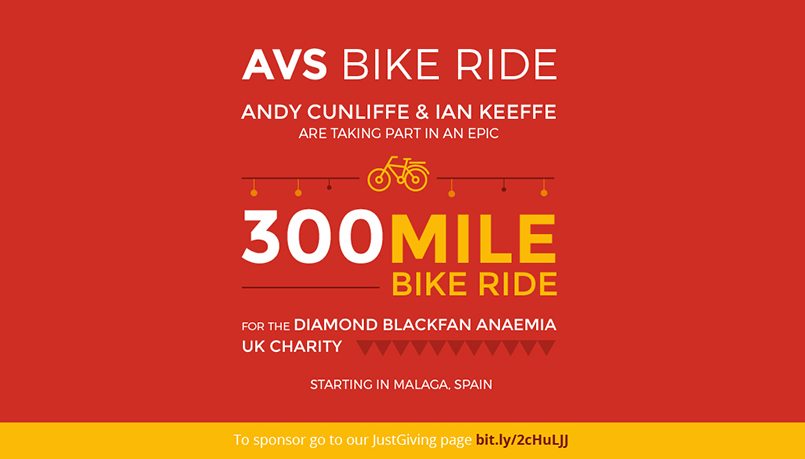 Posted at 10:58h in On the go news, Resale news, workplace news by admin
0 Likes
Share

Benders’ very own Managing Director Andy Cunliffe and Sales Manager Ian Keeffe are among a group of five daring participants from the UK vending industry AVS taking part in an epic 300 mile bike ride for charity, starting on the 20th September in Malaga.

The duo will be joined by cyclists from 4 Aces, Crane Merchandising and N&W. The group will undertake a staggering 17,000 ft of climbing during the ride, travelling via Seville and crossing the border into Portugal to arrive in Vilamoura on the 22nd September in time to attend the annual AVS conference. The hot, sticky conditions expected at this time of the year only adding to the trepidation of the group undertaking this remarkable feat.

The group unanimously agree that any suffering they experience during this astonishing feat pales in comparison to those suffering from the rare Diamond Blackfan Anaemia (DBA) condition. DBA is a rare bone marrow failure disorder, in the majority of cases diagnosed before 12 months of age. Sufferers often require a lifetime of treatment and in some cases a bone marrow transplant. The group are hoping to raise awareness and much-needed funds, by undertaking the ride in the name of the DBA UK charity.

Ian Keeffe commented, “Many hours of dedicated training time is being put in to prepare for this challenging ride. I consider myself to be an experienced cyclist, however, due to the taxing conditions I believe this ride is going to hurt!”

Andy Cunliffe added, “Both myself and Ian were among the group that cycled from London to Paris last year for MacMillan and EdUkaid. Although the distance was similar the route was reasonably flat which suited me, it’s the 17,000 ft of climbing that is concerning me on this occasion.”

Andy continued, “The group managed to raise a phenomenal £15,000 for MacMillan and EdUkaid last year, I would be elated if we could support DBA UK in a similar way this year.”

The team can be sponsored through Just Giving by following the link https://www.justgiving.com/fundraising/Richard-Allen22. Just Giving are a not for profit organisation, and Gift Aid will be claimed on a charity’s behalf where the donor is eligible. All donations will go directly to DBA UK as each member of the team will fund their own way for accommodation and food throughout the trip.

The rest of the team here at Benders will be donating generously and cheering on Ian, Andy and the entire cycling squad building up to the big event – we’re just glad it’s not us!

We’re all incredibly appreciative of any support you can give to these amazing charities, too. For more information on DBA UK, visit http://diamondblackfan.org.uk/.