Posted at 09:58h in On the go news, Resale news, workplace news by admin
0 Likes
Share

Benders is celebrating a record-breaking contract, the result of an exclusive deal with The Broderick Group, the details of which have just been announced.

During the next three years, Benders will supply the AVA and Vending International’s, ‘Best Operator’ with an astonishing 50 million paper cups. It’s one of Benders biggest ever deals with an independent vending operator.

‘We’ve continued to grow in recent years despite the recession and it makes sense for us to plan for continued expansion by negotiating an exclusive deal for the provision of all our cups and agreeing terms that will take us through to 2018’, Johnny Broderick went on to say. ‘It’s not just about volume; we’re very impressed by Benders’ understanding of our objectives.’

High on the agenda at The Broderick Group these days is ‘Social Media’. The company’s installations, particularly those at airports and in Further Education establishments, continue to feature media screens, which allow brands to advertise to consumers directly at point of sale. With a vending park that’s being used as a cradle of New Product Development by many of Britain’s leading brands, Broderick’s ability to communicate promotional messages to consumers is the key, perhaps, to its success…

‘The cups are a huge opportunity to draw customers to our social media platforms on Twitter, Facebook, Instagram and YouTube’, Johnny said, ‘Benders’ input into the creative process was invaluable to us, they really ‘got it’. We have a real partnership with them now that’s based on design, ideas and innovation. Between us, we’ll turn the humble paper cup into a powerful tool for sales and marketing.’

Sales and Marketing Director for Benders Mike Gardner added. ‘It’s a tribute to our business relationship with Broderick’s that they’ve given us their coffee bar business for the first time’, he said. ‘Broderick’s business with us in vending cups has grown significantly year-on-year and there’s every indication that this trend will continue; so when you add to the that the incremental business that will emerge as the result of Broderick’s continuing growth in the coming years, the potential is very exciting.’

‘Benders has been a staunch supporter of Broderick’s for a long time’, Peter Broderick acknowledged. ‘It’s a business that mirrors our own, built on Innovative and continuous improvement. Mike, Andy, Emma and all the design team are always available to us and Ian Keeffe, our day-to-day man, does a fantastic job of looking after us, so as far as we’re concerned, it’s a ‘win-win’ going forward.’

Johnny Broderick says the aim is ‘pushing the boundaries’ and whilst Benders’ team has created a wide range of bespoke cup designs, the concentrated Social Media focus promises to be a real winner, encouraging customers to engage with the Broderick’s brand in return for rewards, prizes; treats, and discounts… 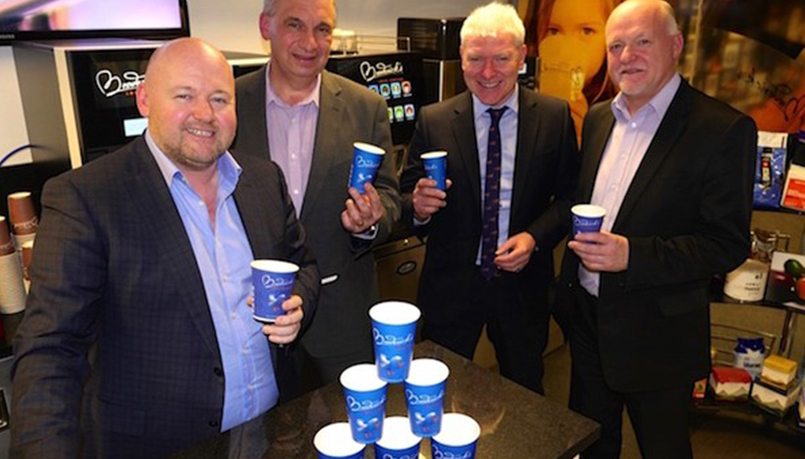